We are lucky to have at the eastern end of our village a Grade II Listed Boundary Stone set into Castle Ely Bridge - this is just outsde our village.

We also have two Milestones - one opposite Myrtle Villaa which is at the eastern end of the village and one on a disused loop of road close to Oakland's House.

They are on what was the old main turnpike road from Carmarthen to Hobb's Point.
Later to become the A477 trunk road into South Pembrokeshire.

Llanteg Tollgate was run by 'Billy the Gate', William Oriel - who was the village cobbler, tollgate keeper and vilage schoolmaster all rolled into one.
William's wife was an invalid and he would puh her around the village in a basket invalid chair.
Nothing remains of our village tollgate but it appears to have been situated at the S.W. corner of Llanteg Crossroads to the west of Llanteg Garage.

We have no pictures, sketches or remains of Lanteague Toll Gate, but one found at the St Fagan's Museum is shown below and may have been similar to ours: 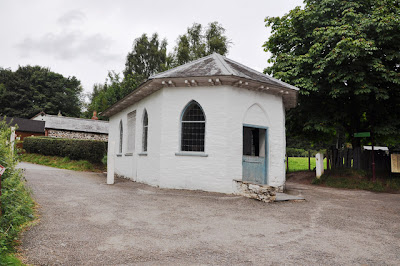 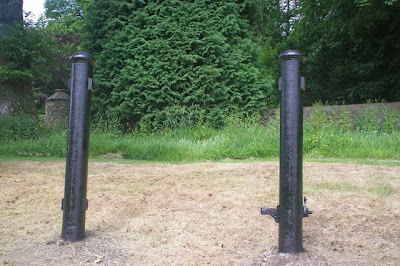 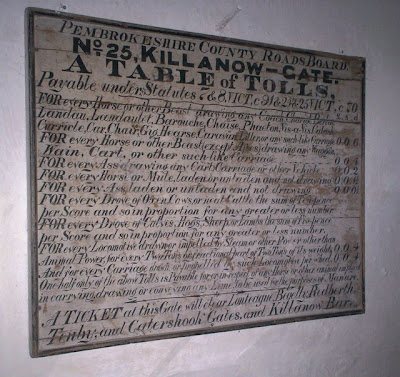 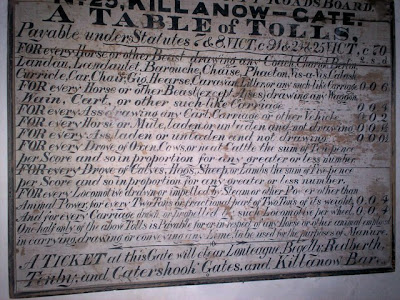 The above Toll Gate Posts and Table of Tolls are now located at Colby Lodge but were
originally situated at the Kilanow Toll Gate three miles west of our Lanteague one.


CRUNWERE MILESTONES
Our parish can boast two milestones, one at either end of Llanteg.  These milestones show the distance to Hobb’s Point in the west and Carmarthen in the east (with the Oaklands one showing 18 miles to Carmarthen and 15 miles to Hobb’s Point) and are marked at their foot by the manufacturer – Moss & Sons 1838.
With the help of Carmarthen Library mention has been found in trade directories of a William Moss and Son, iron founders in Blue Street, Carmarthen (1835).  William Moss also had Ironmongers, Plumbers, Braziers and Tinplate Works at Guildhall Square, Carmarthen.  Earlier in the 19th century William Moss of Carmarthen also issued copper trade tokens which read:-
PAYABLE BY WILLM MOSS CARMARTHEN – SWANSEA –
AND AT JACOB & HALSE LONDON 1813 (shown within a wreath of oak and acorns).
(Trade tokens appeared when the supply of regal coins was inadequate.)   These tokens were manufactured by Halliday of Birmingham.
We also have a County boundary stone set into Castle Ely Bridge as the stream beneath is the actual County and Parish border – there are no maker’s marks on this item.
Posted by Ruth Roberts at 11:25 No comments:

From 'Llanteg Turning Back The Clock'.
William Oriel
William celebrated his 20th birthday on 13th February 1813 by marrying 17-year-old Elizabeth David at Marros Church. By 1822 William had moved across the parish border into Crunwere and was employed as a
joiner. The following year he was living at Milton Back and was described as a carpenter. William and Elizabeth remained at Milton Back, and following their deaths in 1855 and 1861 they were buried – like many other Oriels over the next 125 years – at Crunwere Church.
William junior was baptised in 1826 and went on to marry Sarah Davis in 1857. He was the tollgate keeper, cobbler and schoolmaster at Llanteg, combining the three occupations in the little tollgate building that stood at Llanteg Crossroads. Locally he became known as ‘Billy the Gate’.
Legend has it that he would push his wife Sarah around the village in a bath-chair, which would seem to bear out her gravestone inscription, ‘long in illness borne with great patience’. Sarah died in 1873, and William later lived at York Crescent until his own death in 1890.
William and Sarah had three children, their two daughters Ann and Sarah becoming the first and second wives of Henry James on Caldey Island (there is an unusual group photograph on page 108 of Roscoe Howell’s book Caldey showing Henry with both his present and future wives, two ladies of very different appearance). In 1882 William’s only son John married an Amelia Johns at Pendine, where he lived at Wheelabout,
carrying on his trade of carpenter/wheelwright.
Posted by Ruth Roberts at 11:24 No comments:

From 'Llanteg Turning Back The Clock'.


Mail Coaches
It was on 6th April 1839 that the Royal Mail first travelled through Llanteg on the new Turnpike road from Carmarthen to Hobbs Point.

In Horse Drawn Carriages by D.J.Smith (Shire Publications 1980) the Mail Coach of the 1830s is described. It was a four-wheeled coach adapted to carry His Majesty’s Mails. The coaches were built by John
Vidler & Co. of Millbank, London, and hired out to the Government. They were painted in the royal livery of scarlet, maroon and black with the royal coat of arms on the door panels. The guard-in-charge wore a scarlet livery and sat with the mailbags secured in a special locker under his feet. He was armed to defend the coach with a blunderbuss and pistols, and carried a long stemmed horn for sounding warnings. The regulation horn was 3ft in length and known as the ‘yard of tin’. The four-horse teams, also hired for the purpose, were driven in stages of 7-10 miles, according to gradients and the state of the roads. Timekeeping was so accurate that people would set their clocks by them.
Posted by Ruth Roberts at 11:20 No comments:

From 'Llanteg Down The Years'.
In 1846 there is a Report of an Assistant Inspector in which he states:“there is no gratuitous education of any kind on week days in the parish. Many parents send their children to the schools of Tavernspite and Amroth. Generally speaking the people are remarkable for their good character. The wealthier class of farmers only are well educated, the smaller farmers are very illiterate and cannot afford to give their
children any education”.
During the middle of the 19th century a school was also held in an old meeting house at Craftie (modern Crofty).Later there was a school for young children kept by the man in charge of the Toll Gate, which used to be in existence at Llanteg Cross.
Toll Gate and School
Toll Gate - not shown on the 1841 census.
Occupied by William Oriel in 1851 - he was the toll collector and schoolmaster and was still there as toll
collector in 1871. The property was unoccupied in 1881.

Situated at Llanteg Cross.
It was called “Billy the Gate’s school” and it was a building 12ft by 12ft, which served as a dwelling house, toll house and cobbler’s shop, in addition to being the school. The children sat on backless forms, and had no desks; all the modern school equipment was missing and the only playground the children had was the turnpike road. About twenty children attended this school, and each child paid one penny a week, besides providing a spelling book, slate and pencil.The Public Elementary School was erected in 1876 with the help
of a £30 grant from central Church funds, and was to accommodate 50 children. It opened on 13th February 1877 with 15 pupils.
In its first years a few children were registered at only three years of age but this declined after around 1910 when most pupils would be five years old.
Posted by Ruth Roberts at 11:17 No comments:

From 'Llanteg - The Days Before Yesterday'.


Billy the Gate (William Oriel)
extracted from the Narberth Weekly News, April 19th 1923 and October 11th 1923
At Llanteague the then new turnpike road to Hobbs Point crosses the two old roads, one from Tavernspite, and the other from the church and beyond, where they joined, and then immediately separated again - one for
Trenewydd etc., and the other for the direction of Amroth. At this point there was a gate across the new road, which you could not pass with any vehicle, horse, ass etc., without paying a certain toll. In connection with this gate, and built up to it on one side of the road, there was a little house of two floors with a hipped and slated roof, with a window at each side on the ground floor to enable the occupant, who was the collector of the toll, to watch the traffic up and down the road. There was a door in two heights looking across the road, and a window in the upper floor right over it. I am dependent on memory, but I judge the building was not more than 12 feet by 12 feet out to out.
In this little house the toll collector lived. At the time I want to refer to, this office was held by a bachelor of peculiar parts and appearance named William Oriel, known locally as ‘Billy the Gate’. In addition to this
public position, he was a cobbler, and made and mended boots and shoes, and besides kept in his little house above described a school for the instruction of youth in the rudiments of knowledge. This at that time was
the only school in the parish, and was attended by about twenty children between four and perhaps ten years of age, who were taught the alphabet, a little spelling, reading, and a little - very little - writing, mostly on a slate.
It is no discredit to the pluralist head teacher to add that this covered the curriculum of his capacity, for it represented the extent of his opportunities in that direction, and he did not attempt to go beyond his depth.
His peculiar appearance was due to a severe curvature of the spine, which gave him an undue proportion of length of leg, and shortness of body, and set his head unusually low between his shoulders. This also
was no discredit to him, but on the contrary appealed to everybody for sympathy and consideration, as it arose from some accident or weakness or neglect during his infancy. He was a strict disciplinarian, and I can even now feel the bitter sting of his ebony ruler on the palm of my hand, and of his cobbler’s knee-strap across my shoulders, and I am honestly convinced that I was not by any means an unruly little boy.
To this academy of learning my brother Tom and I were introduced in the summer of 1856 walking daily from the Roses, where my parents then lived, but my father had taken Garness Mill, and was entering into possession in September. I was then four and a half years old.
We were probably 20 children or thereabouts attending this school, each paying a penny a week for the privilege, finding his or her own slate, pencil, spelling book, etc., and were drawn from eight or ten households in the parish. I often wonder what has become of them. I don’t think I have met more than four of them since we were children. They are scattered in many directions, and the majority are in all likelihood laid beneath the sod by now.
Posted by Ruth Roberts at 10:58 No comments:

Compiled by Ruth Roberts of Llanteg History Society.
Ruth can be contacted on
ruthroberts123@aol.co.uk
or by ringing
01834 831298.

Llanteg is a small village in the east of Pembrokehire, West Wales.
Now on the A477 trunk road into South Pembrokeshire, it once stood on the turnpike road that linked Carmarthen to Hobb's Point.